Open web movements promote the idea that anyone can contribute to and develop knowledge to be used and shared by a global commons. What happens when traditional indigenous groups engage with this model? Can thoughts, language, customs, and ideas rooted in a specific context, history, and culture be embedded in a commons where truly anyone can contribute? Information about speakers and panelists for this session can be found here.

Moderator Eddie Avila, Global Voices’ Rising Voices Director, opened up the roundtable discussion with a story about a boy orphaned at a young age who found a box of cassette tapes of traditional songs and stories from his father’s childhood that a researcher had recorded long before.

The young man thought it would be a good idea to digitize the tapes and share them online, to the displeasure of his siblings. This anecdote raises the question of ownership. Does the content belong to the son who found the tapes, his siblings, the late father, the community or the researcher?

Seeking consent from indigenous communities to tell their stories online

Technological advances now make it possible for people to document and archive important things with the possibility to share it online. A looming issue is whether or not users must consider seeking consent when sharing indigenous content on the open internet.

Nick Lunch of InsightShare works with different indigenous communities and believes that the “process is more important than the product.”

Elders in indigenous communities invite Lunch to work on long-term, documentary and participatory video projects. This process helps communities address issues and come up with solutions to bring about social change.

How vulnerable a community would be when you make content from that community available on the Internet?

He added that indigenous people are often exploited when they upload indigenous content on an open internet typically run by big corporations, aside from researchers who intentionally involve the community.

Getting consent is sometimes difficult because indigenous people may not have knowledge about the open internet and used his grandmother as an example. Panigrahi tried to educate her about it and asked if he could share one of her particular stories about traditional healing medicine but she refused because one cannot just simply acquire this information just like that, it has to be earned.

Many indigenous communities are wary about sharing traditional knowledge with a wider public. In some cases, elders are open to sharing, but other times they adamantly control what they reveal.

Digital activist, Simona Mayo, spoke about how Raul Ruiz, a director of cinematography, came to Chile during the dictatorship to shoot documentaries. In one particular film, he focused on elder Mapuche people and their communities, asking them their views on the government.

The problem was that he nor cameraman man could identify the Mapuche people because they did not have names. Mayo also referenced a Chilean historian who Mayo saw as a “liar.”

He took a lot of knowledge about the Mapuche language and started to publish them like it was from him. He's not a speaker, he's not a wise man, he's just an academic.

Mayo lamented how this historian travels around the world and holds Mapuche rituals and weddings, but “we do not have weddings,” said Mayo.

That's just one example of what may happen when an indigenous group allows outsiders into the fold. There's a real concern that the outsider may misuse the knowledge they've acquired from the communities they entered, which often results in broken trust.

To follow up with this idea, Lunch shared direct quotes from an indigenous shaman from Ecuador who chooses purposefully not to be online:

We can't stop technology, we need to use it, but we must introduce it with great caution. Education must come first. Information has to be clean when it's shared, otherwise it spreads like a virus. 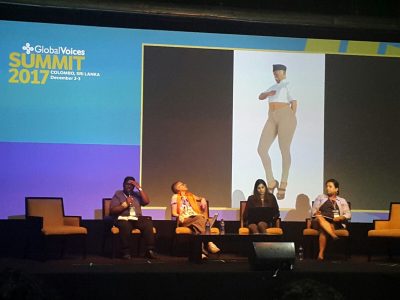 Voices on Sex, Rights and Violence From South Asia