#GVSummit2017 written into the beach in front of our Hotel. Photo by Isabelle Poweleit. Used with permission.

It’s now been a couple of days since the Global Voices Summit in Sri Lanka came to an end. For me, it was the first summit I got to attend. Excitement and anticipation were on an all time high in the week leading up to it. What would it be like? Who would I meet? What would we talk about?  Multiple questions went through my mind as I prepared for the journey.

Including a question that is regularly at the forefront of my mind when meeting new people: will they accept me?

I consider myself a self a rather confident person. But being a member of the LGBTQ+ community is one particular aspect I find myself, from time to time, hesitating and wondering about people’s acceptance.

I had seen many GV faces online already having connected with GV members digitally. But besides a Berlin meeting earlier in 2017, I had yet to meet many of us in person. It speaks for our community that I was never negatively apprehensive about the meeting, despite going to a still foreign-to-me country over 8000 kilometres away from my home country Germany to meet people who I hadn’t met or even some who I hadn't even talked to before. I didn't worry much because it had been welcoming from the very start. But you kind of do worry, a little bit, about small things anyway, right?

When the summit finally started and we all came together bit by bit, everything fell into place. I found myself marvelling over how peaceful and warm-hearted the atmosphere was. Wherever I went, whoever I connected with, I received nothing but kind smiles and compassionate engaging words. I found myself talking to so many people for hours over lunch or coffee or dinner (and could've talked to every single one of them even longer).

It led me to reflect on the question of what makes this group of people –this GV community– different from the people we meet in our day to day lives? What creates this unique atmosphere of kindness and acceptance so much clearer and resounding than we, very often, feel is missing elsewhere? 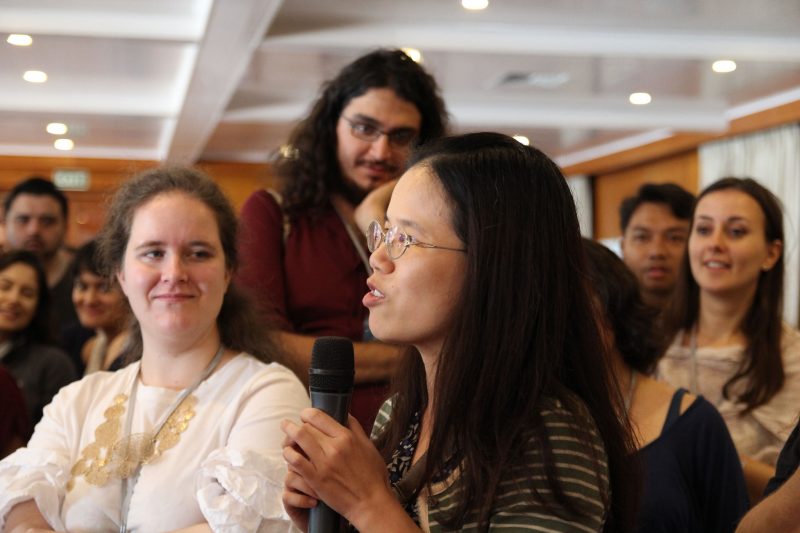 The author (on the left) looking at I-fan, a contributor from Taiwan, speaking at the internal Global Voices community meeting. Photo taken on November 29, 2017, by Raphael Tsavkko Garcia [2]. CC BY-NC-ND 2.0.

There have been, and still are, situations in which I decide to not disclose my sexuality. They grow fewer over the years but the uncertainty of whether the person in front of me will be accepting of who I am, considering the remaining stereotypes in my world and even more so in other parts of the world, lingers. I am fortunate enough to be living nowadays in a place that is pretty safe and I haven't faced open rejection or even homophobia often. But I am very aware that there are places and people that oppose you as person solely because they deem who you love as not right. And that’s ‘only’ Germany. A far more dire and horrid situation reigns in many other countries.

It’s always this little voice in your head that questions: what will change once they know you’re not straight? They could look at you differently. They could see your worth lessen. They could be apprehensive.

These things have happened to me. Sometimes it was a passive reaction I got, maybe not always verbal, but it was there, clear to see. Over time, I have learned and am still learning to shrug it off. If they don’t agree and accept you, that’s their issue. It doesn’t make you actually worth less. But it can be hard because it does leave a stale aftertaste.

But here's the thing about GV: none of these worries ever had any ground during the summit (or during my time with GV leading up to it, for that matter). There was not one moment or instance in which I felt anything but comfortable and safe to talk about my sexuality. It was always met with positive reactions, ranging from a quiet nod to open grins and exclamations of ‘that’s so cool’ when I mentioned I’ll be moving in with my girlfriend in January. I was freely expressing myself as who I am without the feeling of having to keep things secret.

And that’s where the utopia comes in. As I was sitting on the flight from Colombo to Doha, after the summit was over, I found myself deep in thought about how GV is this wonderful, special community of people from all over the world, from various cultures, beliefs, orientations and roots. And how we, as a community and as every single one of us, focus on our differences by highlighting and embracing them instead of pointing our finger. 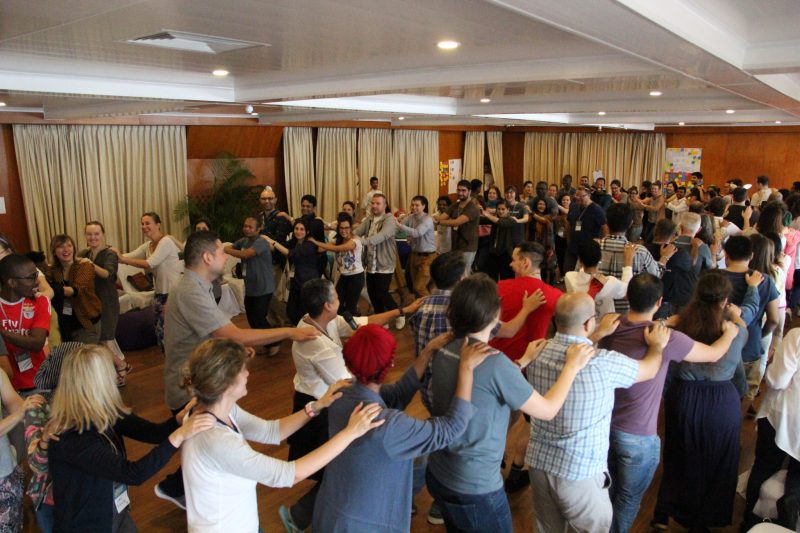 A hundred and twenty Global Voices contributors from more than 60 countries dance in a congaline based on the year they joined the community. Photo taken at the internal community meeting in Colombo, Sri Lanka on November 30, 2017. Photo by Raphael Tsavkko Garcia. CC BY-NC-ND 2.0

But what does make GVers different? What common trait unites this group of people from all over the world? It’s a mix of many traits such as compassion, love and support every single person brings in to combine it to a colourful human all-spice blend.

And I believe the overarching trait we all share is acceptance. We, in the GV community, are already living and practicing what this utopia is made of. Accepting who’s in front of you. Taking them the way they are, without judgement. We see each others’ assets, differences, facets, stories and struggles and we work with them –not against them. You can be who you choose to be and we’ll embrace that. And if you can't be who you are somewhere else because of circumstances like political climate –you can be yourself here. And as I've come to see during the summit and through my work with GV over the last couple of years: acceptance is the norm here, it's not the exception from the rule.

Of course we’re not without flaws and there still are differences and underlying prejudices we struggle with. After all, that is a human thing we can’t escape either. But we take these prejudices and face them straight on. We’re challenging ourselves and each other to grow constantly, aided by that very pluralism of every person that’s different from ourselves.

GV thrives on and benefits from differences, while still sending out this unique message: you are valuable and important the way you are and we accept and embrace each other for who we are, as equals, none worth less than any other.