The Mapuche Language Finding New Trails Online: Just One Piece of the Puzzle 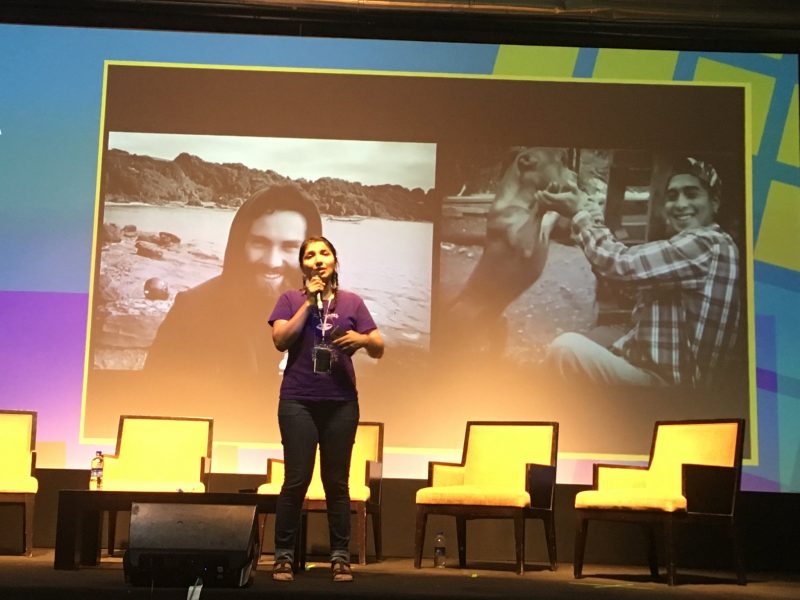 Presenter Simona Mayo is a Lingüistics Ph.D student at the University of Buenos Aires. Since 2010 she has worked with the Mapuche social organization “Kom kim mapudunguaiñ”, which is dedicated to the Mapudungun (Mapuche language) revitalization, teaching, and diffusion in Chile and Argentina.

Eddie Avila explains that a key right for indigenous communities is the right to communicate in their own language. There's technical, linguistic and cultural challenges around this – sometimes we lack fonts, sometimes a language isn't written down. Language activists are wrestling with whether they want to bring languages onto these new media platforms.

Working with Wikipedia and others, Eddie and the Rising Voices team is working on indigenous languages around Latin America. Simona Mayo is one of the grantees of this program, working to preserve the Mapuche language.

The Mapuche are located in Argentina and Chile, and there's an existing culture working to teach people Mapudunguaiñ. Mayo works for an organization called Kom Kim Mapudunguaiñ, which means “everyone will learn Mapudunguaiñ”. Their goal is teaching people – indigenous and others – how to speak Mapudunguaiñ as a second language. Why would someone without Mapuche heritage want to learn the language? The internet plays a factor.

Most of the Mapuche population in Argentina and Chile is based in cities, the consequence of a long period of colonization. Because families were forced into cities, it broke up the intergenerational transfer of the language. There's a huge generation of silenced Mapuche speakers. The people working to teach Mapudunguaiñ are the children and the grandchildren of that silent generation.

The goal is for a new generation to talk, chat, joke, rap and write online in this Mapudunguaiñ. Mayo and others are using the internet to spread the language, using tools like their website, as well as sites like Mapuexpress, a website that's been sharing news about Mapuche territory for the past 17 years. A website, Kimeltuwe, uses Facebook to teach the language to all those who are interested. Because it's on Facebook, it reaches some Mapuche who hadn't previously been interested in learning the language, as well as people with no connection to Mapuche who discover the language online.

Young members of the Mapuche movement are interested not only in preserving and reclaiming their ancestral lands, but the territory of their language and their culture, online and off. Mapuche youth are at risk in Chile and Argentina, with more than a dozen Mapuche youth killed in Argentina in the last year. “When we talk about the Mapuche movement, it's about a difficult struggle, where we've lost people. When we say we're raising our identity, it has a human cost. The Internet is another tool for struggle.”