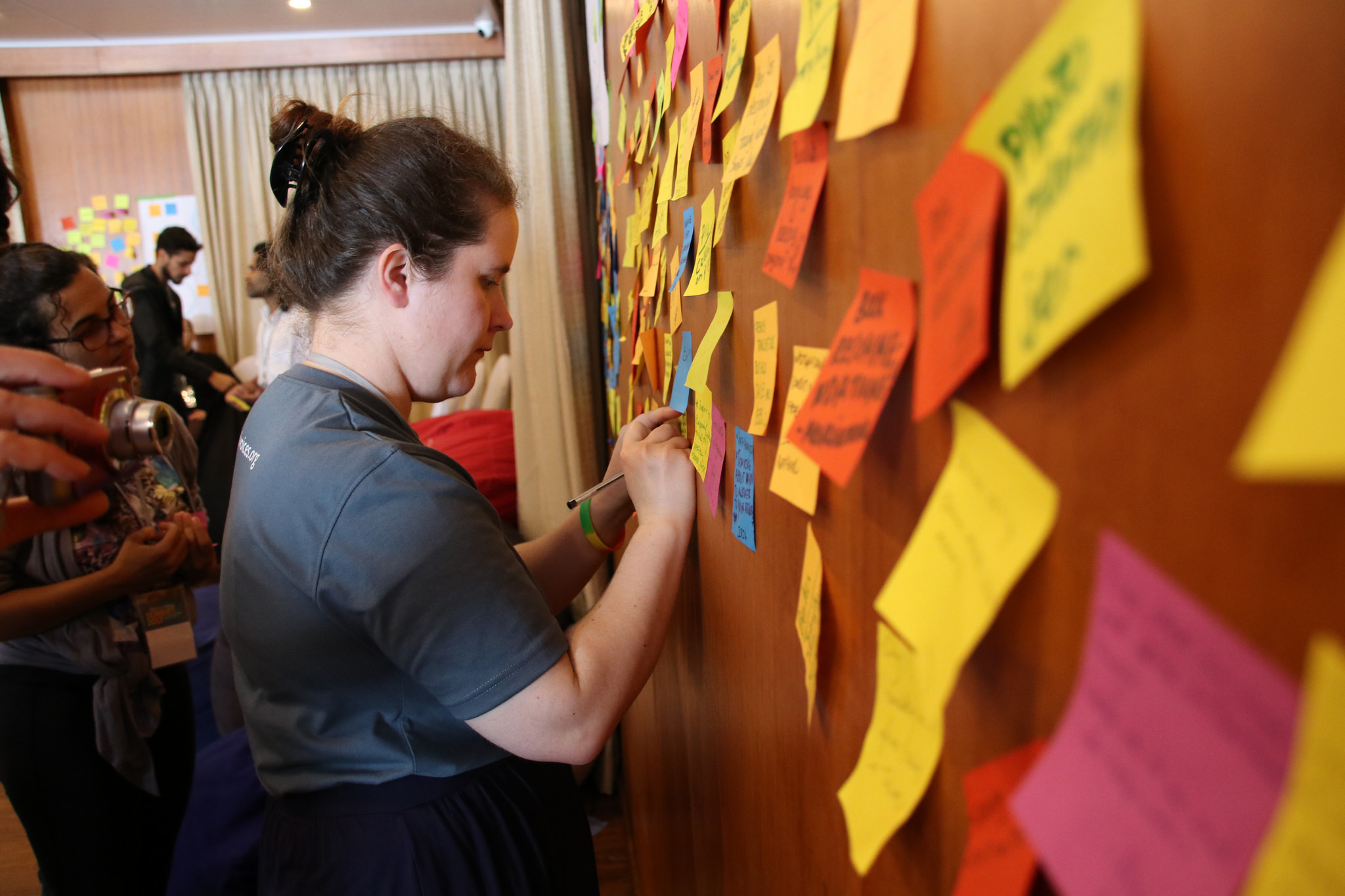 Over the course of the internal GV summit, Global Voices contributors from 60 countries discussed the community-based organization’s present and future through games, group discussions and workshops. GV author, Karolle Rabarison, lead one of these workshops which aimed to develop skills in communication, interviewing and empathy through improvisation techniques. Below you can find details for some of the activities from the workshop.

Game 1: Party Planning
Set up: Small groups of 4-5 people.
Prompt: We’re scheduled to have an end-of-summit party on Sunday night. Little did we know that the core team were so busy putting together the summit programming that they planned absolutely nothing for the party. It’s our job to plan it together now! What great ideas can we come up with to make sure it’s a night to remember?
Process: Take turns suggesting an idea and move the party planning process along.
Round 1: Each turn, you must respond with “Yes, but…” and justify why that idea isn’t going to work.
Round 2: Each turn, you must respond with “Yes, and…” and build on the previous idea.
Outcome:
The participants felt that the “Yes but” exercise resulted in a reasonable outcome but did not go far in the planning of the party. On the other hand, “Yes and” resulted in a ridiculous, unfeasible party even though it was fun to plan.

Game 2: Counting Up
Set up: Everyone in a circle.
Prompt: Take turns counting (1, 2, 3…) and see how far we can count up!
Process: Anyone can start and anyone can go next. The catch: We start over back to “1” when two or more people speak at once. Do multiple rounds.
Outcome:
The participants had fun with this. The highest count was 11 and we parsed out the various strategies people took when they decided to answer.

Game 3: Question Game
Set up: In pairs or groups of 3.
Prompt: Facilitator describes a setting for a story, and each pair/team works together to describe what’s going on and make the story progress.
Process: Take turns speaking. The catch: You can only respond to each other’s input in question form.
Example settings:
You rented a helicopter. What happens next?
You wake up on the beach and you don’t know how you got there.
It’s your first day of school.
Outcome:
This exercise helped highlight the cues needed for deep listening and getting people to continue a conversation.

Game 4: Speak Your Language (other than English!)
Set up: 3-5 volunteers take the stage with everyone else in the audience.
Prompt: Get creative and work together to build and act out different stories.
Process: Volunteer actors on stage. Audience shouts out setting or situation prompt to start the story (e.g. “You’re in a canoe!” “You just found out you lost $1,000!”). Actors work to tell a story and act out the scene but must communicate in a language other than English. Anyone from the audience can jump in and “bump” someone off stage. When this new actor joins, the audience shouts out a new prompt for the story.

Outcome:
This exercise was a rousing success!

Games that lead to interesting discussions

Through laughter and games, each of the 8 participants learned new skills to bring to their work with GV and they were invited to use the techniques in the following days during the internal and public meetings. 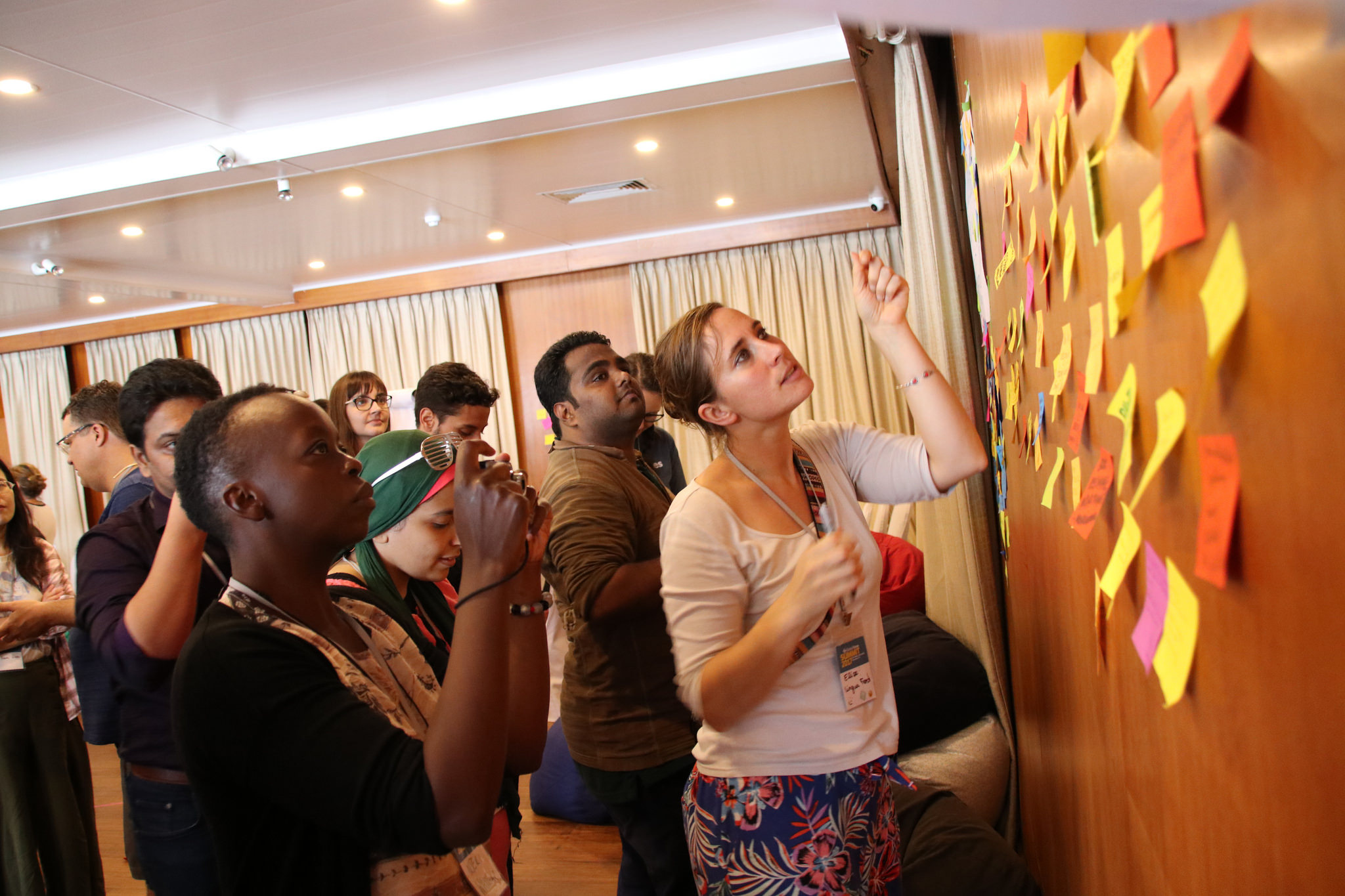 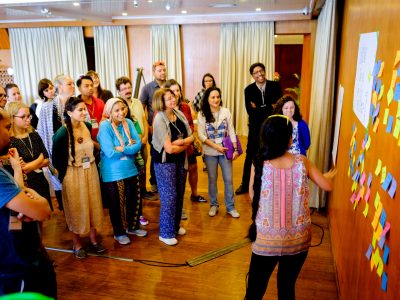