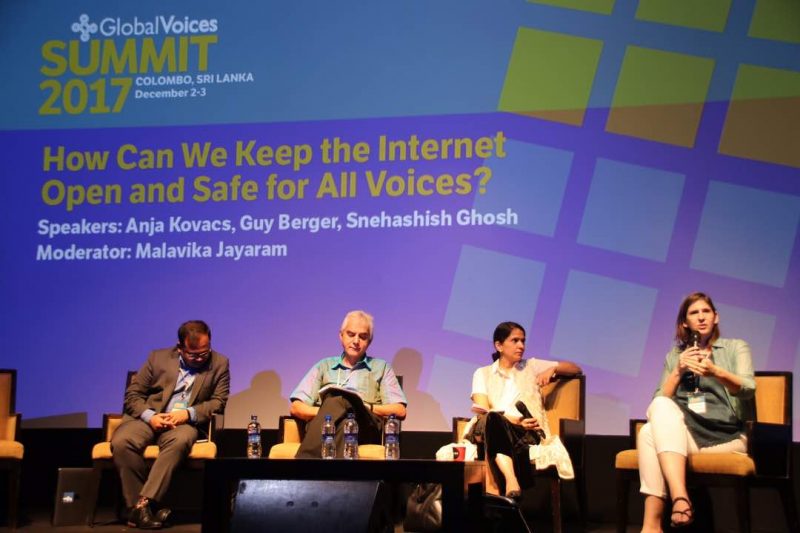 ‘How Can We Keep the Internet Open and Safe for All Voices?’ panel. Photo by Faaris Adam, used with permission.

‘Is there a way of thinking about the well-being of the Internet?’ asked Malavika Jayaramand, a privacy and technology law expert and moderator of the panel, ‘How Can We Keep the Internet Open and Safe for All Voices?’.

This question opened the debate on the current health of the Internet, with Jayaramand leading the discussion alongside the director of the Internet Democracy Project, Anja Kovacs, UNESCO's Director for Freedom of Expression and Media Development, Guy Berger, and Facebook's representative, Snehashish Ghosh.

As grave a situation as Internet shutdowns are, it is not the worst threat against the Internet's health. What’s worse is surveillance. Not only by governments, but also by corporations.

Nowadays, as our digital and physical bodies are merging — given that our bodies are increasingly becoming data — the obliged question becomes: how to protect our rights as strongly as we did before?

We need to put checks and balances in place. How is it even possible that we can sign away our right to privacy? What has happened to the world when there isn’t a tiny part of privacy that we can’t sign way?

In order for the Internet to be more open and healthier, a business model that moves away from “corporate surveillance” needs to be implemented.

For Berger and UNESCO, not all individuals and groups interested in contributing to the health of the Internet are able to compete under this existing business model, so a proposed solution is the continued fostering of the multistakeholder model for Internet governance.

However, as the other panelists mentioned later on, as much as “multistakeholder-ism” is desirable, it is ultimately influenced by relationships of privilege and power:

. @MalJayaram “What does multi stakeholder-ism even mean, how many have been invited to events like IGF cause they tick all the right boxes: women, queer, indigenous.. to make the process seem more inclusive. But does that mean we really have a voice?” #GV2017

In relation to these issues of power, Kovacs noted that businesses like Facebook have made it easier for users to access the Internet, but they also wield a huge amount of power.

If many of us have very little influence on changes to the Internet landscape, what can companies like Facebook do to help maintain the health of the Internet? To answer this question, Ghosh highlighted the work that Facebook has been doing to combat the so-called ‘fake news’ epidemic, a battle that Ghosh feels is part of Facebook's contribution to Internet health.

The floor opened to the following online discussions about consent and the use of data:

@MalJayaram: concerning Facebook: I would love to see work being done with the actual platform instead of relying on users who are the weakest link and are most unsafe and vulnerable.#GV2017 #GVSummit2017

Literacy can only go so far, platforms should have serious discussions about ethics and consent. The tendency is “manufactured consent” as @sanasaleem pointed out and there things we shouldn't even be asked to consent to! #GV2017 #GVsummit2017

So important. Consent is not consent when a) monopoly ownership of platforms and b) agreements are dense and unreadable#facebook #GV2017 https://t.co/DlcgEaXTBu

Interesting, now discussing consent applied to tech tools, i.e. Facebook. So I'm thinking… when FB automatically tags people in a post, isn't it as when a man puts his arm around your waist and hopes you won't do anything about it? #gvsummit2017

Audience member @jackpoint627 raises question of why the privacy settings in services are not by default on highest privacy setting and points out that often the legal system has to deal with consequences of that.#GV2017 #GVSummit2017

Facebook isn’t perfect or good really, but it’s nice of them to send a rep to #GV2017 for us to accost on stage. @globalvoices #FacebookINTERVENTION

According to Kovacs’ final remarks, what is becoming even clearer is that we, as civil society, need to continue to fight back.

The Internet is ours and we need to reclaim it and spend time learning about data protection, privacy, encryption and share their knowledge with others.