How Conflict Shapes Storytelling and Storytellers 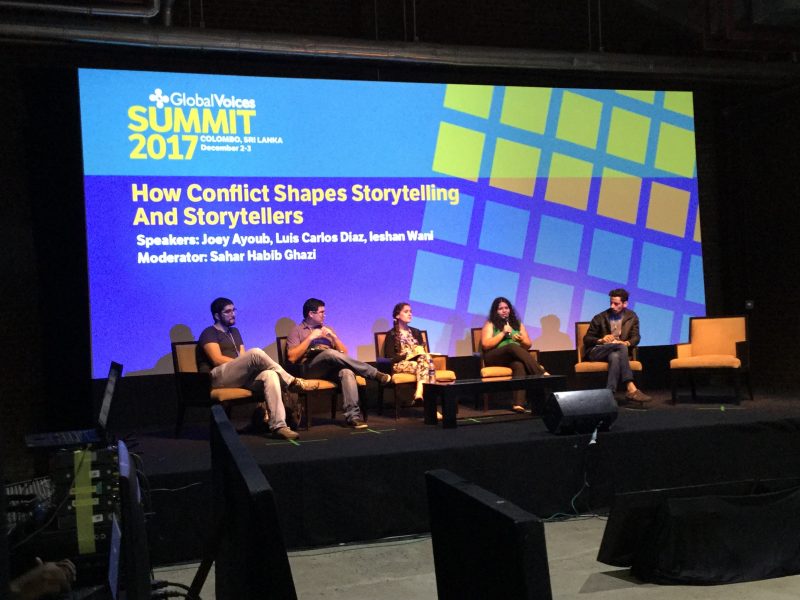 Four bloggers shared their experiences of reporting on conflict at the Global Voices Summit in Sri Lanka. The discussion was ably moderated by Sahar Habib Ghazi, Managing Editor of Global Voices. 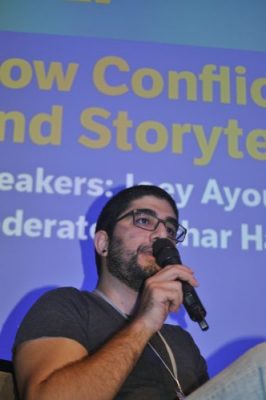 Joey Ayoub, the MENA Editor at Global Voices and founder of Hummus for Thought, reflected on his coverage of the war in Syria, which he described as “forgotten.”

He emphasized that one needs to know and report what is happening on the ground through online collaborations. “We don't focus on geopolitics, but on the personal stories and voices that highlight them,” he observed.

Writing about the Syrian conflict can be lonely and disturbing; Ayoub stressed the need to surround oneself with friends and allies who can offer support. Responding to a question on trolls, he said that one needs to remind oneself that one's story is truthful and accurate, if one is attacked online, even if it makes others uncomfortable. 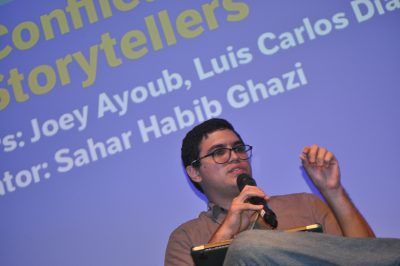 Luis Carlos Diaz, Venezuelan journalist and cyberactivist, discussed the importance of reaching out to people, and realizing that you are not alone in the digital world. The emotions that you choose to present, he noted, are often more important than the information you are sharing.

He added: “The Internet is like the sandbox of sources; you need to pick the one person that will give you the best, most efficient testimony.” We should tell stories that help the people who are suffering, while being careful not to re-victimize them.

Raisa Wickrematunge, a Sri Lankan journalist and co-editor of Groundviews, noted that conflict stories are not about numbers, but they are human stories. She explained how Groundviews contextualizes, frames and produces stories on and from violent conflict: “We go back. We keep going back.”

One year after the civil war in Sri Lanka had ended, her organization put together an anthology of voices – videos, accounts and reactions, how the people felt, one year on – including their response to traumatic events. Wickrematunge noted that although the situation is much better than before, there are still persisting concerns, and her organization, while remaining vigilant, seeks to reflect the unheard voices.

Kashmiri journalist Ieshan Wani pointed out that the conflict in Kashmir is currently the oldest in the world, with over 10,000 people missing. He described the ongoing physical threats to journalists in the region, using the word “oppression” to characterize the atmosphere in Kashmir for freedom of expression. He talked about the challenge of doing justice to the pain and suffering of individuals – referring to an old man's tears.

Here's an overview from The Centre for Policy Alternatives, a leading public policy research and advocacy think tank in Sri Lanka:

When reporting on conflict, start with the voices from the ground, how they've been affected, the context of the issue, and then at the very end you bring in the political angle/involvements. @joeyayoub #lka #GV2017

Staying in your office only and writing the story won't always work, there'll be something missing because there's no connection to the ground reality. @Ieshan_W #lka #GV2017

While situ in #lka is better than it once was, there are persisting issues that we can't ignore & @groundviews looks to tell these stories. @raisalw #GV2017

And a tweet from Global Voices contributor and rights activist Arzu Geybulla: